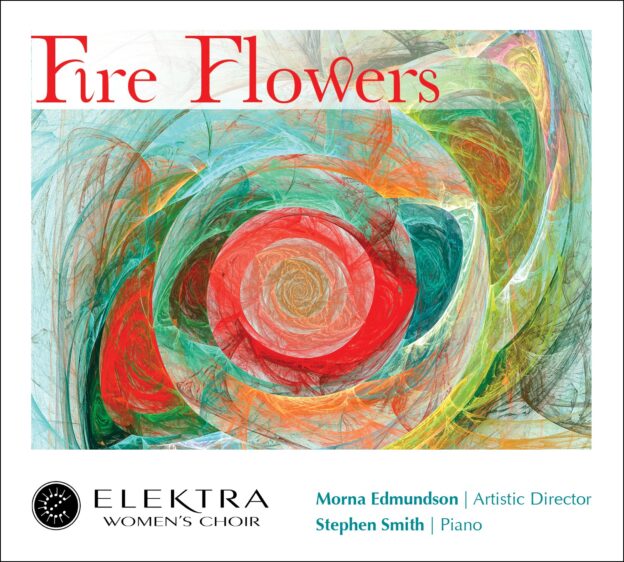 Fire Flowers invites the listener to a wealth of 21st century repertoire for women’s voices, including several first recordings. The opening work, Sicut Lilium Inter Spinas, is the exception, written for women in a 16th century Italian convent. Its authorship by Eleanora d’Este is conjecture based on modern-day research. It was originally published anonymously, as it would have been unacceptable for a noblewoman to publish under her own name at that time. Fast-forward to the five other tracks on this recording by women and one experiences the raw energy of Terre-Neuve by Marie-Claire Saindon and Seikilos by Joanne Metcalf, a playful vocalise by Saindon called Turlutte acadienne Montrealaise, Joni Mitchell’s loving tribute to her baby daughter, Little Green, arranged for Elektra by Kate MacColl, and Susan LaBarr’s exquisite closing track, Spring Shall Bloom on which our wonderful pianist, Dr. Stephen Smith, absolutely shines. A theme of music is represented by four of our favourite composers: Sheldon Rose, Pärt Uusberg, Stephen Smith, and Nicholas Ryan Kelly. There is an intimacy and humility to several of the texts, which can be found in the booklet linked below. The title track by Don Macdonald brings us to a place of acceptance with words by E. Pauline Johnson which compare human suffering to a burnt forest floor – where from tragic circumstances, new growth and delicate flowers can emerge.

Fire Flowers is released online only and can be downloaded in full on iTunes or streamed through your favourite platform.

Pieces on this Recording: