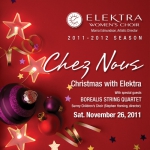 “Chez Nous” means “at our house” and this is the name of our annual Advent/Christmas concert that takes place on the Saturday before the first Sunday in Advent. I have a list of words I consider while programming this concert each year: “welcome, joy, beauty, participation, robust, sombre reflection, surprise, memory, and relevance”. We know many people’s only choral concert of the year will be a Christmas one, and that there will be people hearing Elektra for the first time at Chez Nous. I also want to make sure they hear touchstones of what they expect Christmas music to be, while also delivering uniquely “Elektra” music. Fortunately, in Canada we don’t have to shy away from Christian music at Christmas, so I have complete freedom to program whatever I think will be worthwhile and impactful for our singers and the audience.

Joining us in 2011 were Vancouver’s acclaimed Borealis String Quartet and the Surrey Children’s Choir under the direction of Stephen Horning. For the 2011 Chez Nous, we commissioned several new accompaniments for existing choral arrangements, bringing the Borealis String Quartet into much of the repertoire. Between these and two other world premieres (Antognini and Nash), it was a concert that maintained the thread of familiar Christmas melodies while bringing some new repertoire into being.

If you are considering programming any of the following and have string quartet available to you, contact the arrangers to see how you could get the parts: If You Would Hear the Angels Sing (fast version), comp. Stephen Smith Il est ne, le Divin Enfant, choral arr. Rutter, string arr. Cameron Wilson What Sweeter Music, comp. Eleanor Daley, string arr. Cameron Wilson I Saw Three Ships, choral and string arr. Edward Henderson In addition to the Elektra repertoire shown, the Surrey Children’s Choir performed “He Shall Feed His Flock” from the Messiah, “Christmas” by Canadian composer Violet Archer, and “Vesi Vasyy Lumen Alle” by Harri Wessmann with guest flautist Laura Venek.

In addition to whatever they perform with Elektra, I consider it important for our guest instrumentalists to show the audience who they are artistically, and gave the Borealis String Quartet carte blanche to program non-Christmas repertoire for part of their solo portion. They chose the Allegro con Spiritu from Haydn’s “String Quartet op. 76, No.1”, the first movement of Grieg’s “String Quartet in G minor”, an arrangement of “The First Nowell” by Alfred Pochon, and an arrangement of “What Child is This?” by J. Kowalewski. Audience singalongs were a “Deck the Halls” and “Joy to the World” by Edward Henderson (with string quartet and piano) and “It Came Upon the Midnight Clear”, also by Henderson (string quartet only). The choral parts in both cases were modified from SATB arrangements. In the rep list below, “Night of Silence” and “We Wish You a Merry Christmas” were both encores.