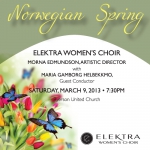 In 2008, Elektra’s Artistic Director Morna Edmundson was in attendance at the World Symposium on Choral Music in Copenhagen, Denmark, where she was in the audience to see the final performance of Norway’s stunning women’s choir Voci Nobili. Led for 20 years by their Founder and Artistic Director, Maria Gamborg Helbekkmo, Voci Nobili consistently received top honours in international competition. Voci Nobili delivered a tour de force performance at the Symposium and stepped off the stage for the last time. Edmundson remembers the performance as one of extraordinary and exquisite music-making, and knew that she had been present at choral history in the making. Five years later, Edmundson is thrilled to be sharing the stage here in Vancouver with Guest Conductor Gamborg Helbekkmo for an Elektra concert entitled Norwegian Spring featuring Scandinavian, Canadian and international repertoire.

Educated as a pianist, singer and a conductor, Maria Gamborg Helbekkmo is currently associate professor at Bergen University College, where she teaches choir conducting, piano and solo voice. She is a frequent lecturer at international conferences, and is often invited to participate as a jury member for international choral competitions. She is a member of honour in the Norwegian Society of Choir-conductors (FONOKO).

Norwegian Spring assures us that spring is around the corner with a delightful program of Grieg, Nystedt, Duruflé, Swingle, and the world premiere of Consider the Lilies by Stephen Smith. This concert is sure to be a high point in Elektra’s history and an event not to be missed!