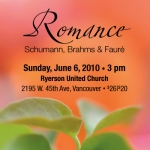 The idea for the 2010 “Romance” concert, had been in my mind for a few years – a voyage of discovery into the musical world of the nineteenth century. Focused around choral and solo vocal works by Schumann, Brahms, and Faure, Elektra and our guest artists touched down on some of the most beautiful marriages of words and music ever, with instrumental works adding depth to the shared experience. This was a concert where the poetry could be tasted as fully as the notes. In addition to the choral works listed, our guest soprano, Martha Guth, with accompanist Stephen Smith performed Schumann’s solo songs “Des Sennen abschied” and “Er ist’s” and Brahms’ “Unbewegte lauer Luft” and “Von ewige Liebe”. Stephen played Brahms’ solo piano work “Capriccio in C Major, Opus 76, no 8”, our harpist Heidi Krutzen played Faure’s “Une chatelaine en sa tour”, op 110 for solo harp, and horn player Ben Kinsman and Stephen Smith performed Saint-Saens’ rousing Konsertstucke.