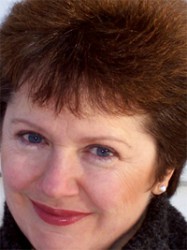 My history with Elektra’s newest patron, soprano Nancy Argenta, and guest artist for Elektra’s concert ‘To Music’ on Saturday, May 11th, 2013, goes back many years, to a summer when both of us were attending Courtenay Youth Music Camp on Vancouver Island. We were both there as young singers, but among the many aspiring soloists at Courtenay that summer, Nancy at the age of 16 years was already distinguishing herself as a standout. Hailing from the tiny hamlet, Argenta BC, around the northern tip of Kootenay Lake, Nancy was the product of the musical Herbison family; her mother Agnes was a very accomplished pianist, her sister Wendy was becoming a very fine violinist and her brother David was also a young singer of some note. Nancy’s obvious talent was identified at an early stage and her trajectory from Argenta BC to London, England to study with Vera Rozsa and Peter Pears (after having completed her undergraduate degree at the University of Western Ontario and a stop in Dusseldorf) was fairly straightforward. I remember visiting Nancy in London for an afternoon in my early 20’s when I was doing my obligatory post-degree tromp through Europe, and being somewhat humbled by the fact that while I was still humming and hawing about what I wanted to do with my life when I grew up, Nancy’s artistry and status as an emerging talent as a concert singer were already evident in the kind of acknowledgement she was receiving in the high-stakes cultural landscape of both London and the European continent.

Our paths only crossed very briefly in the ensuing 20 + years – no more than to remind each other of our respective names, and that was about it. But the dance of the cosmos brought us into each other’s orbit to a much greater degree when in 2001 Nancy and her partner Ingrid Attrott were contracted to establish and head up an Advanced Solo Voice Program as part of the Nelson Summer Songfest – a summer festival and vocal education program my parents and I started that same summer, and which ran for four subsequent summers. The success of that program lead to the continuance of the Solo Voice Program as a stand alone program for three more years after the Festival’s demise, and Nancy, Ingrid and I worked hand-in-glove, myself as the administrator and registrar for the program and Nancy and Ingrid as the Lead Faculty, with the occasional help from some of their illustrious colleagues. This meant that I became intimately familiar with Nancy and Ingrid as brilliant singing teachers and mentors – I never tired sitting in on masterclasses where they team-taught, always in the spirit of collaboration and nurturance rather than instilling competition amongst the singers, which is sadly so often the experience of young artists in similar settings. Nancy and Ingrid now continue this wonderful work at the Victoria Conservatory of Music, which under their guidance is becoming one of North America’s premiere institutions for voice instruction, and which is beginning to turn out astonishing young singers now poised at the forefront of their profession. In the meantime, Nancy has continued her career as one of the world’s most renowned interpreters of the vocal music of Handel and other early music great composers, and is still much sought after throughout Europe and North America as a concert artist.

But probably the most profound moment in my personal journey with both Nancy and Ingrid came during the memorial service for my mother June, in May of 2006. There were two services; one in Vancouver and the second in Nelson, where my parents had established a wide community of friends during the Songfest years. Nancy and Ingrid generously agreed to sing during the Nelson service, and it was decided that they would perform the soprano duo ‘Laudamus Te’ from Vivaldi’s ‘Gloria’. As most memorial services go, it was a hard slog – particularly for me and my family – and we were on the verge of emotional exhaustion. But the moment that Nancy and Ingrid started to sing it was as if the ceiling of the church had lifted off its very foundations, releasing my mother’s spirit to the heavens in the most glorious possible way. People began to grin through their tears and the whole event became one of celebration rather than mourning. It was a moment I will treasure for the rest of my life, and for which I will be endlessly grateful.