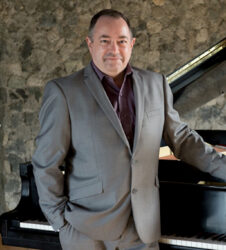 Stephen Smith grew up in rural Nova Scotia, where he sang and played the piano from an early age. After initial studies in his home province in both piano and organ, he attended the Royal Northern College of Music in Manchester, England. While there, he participated in national and international competitions and won numerous awards and distinctions.

Since 1990, Stephen has lived in Vancouver, obtaining his doctoral degree in piano performance from the University of British Columbia, and contributing to the musical life of the city as a performer, teacher, conductor, composer and arranger.

Central to Stephen’s career is his long-standing relationship with some of Vancouver’s finest choral groups. In addition to his work with Elektra (which he has accompanied since 2001), he is also resident accompanist of the Vancouver Men’s Chorus, pianist for the Vancouver Bach Choir, and a frequent collaborator with Chor Leoni Men’s Choir, the Vancouver Chamber Choir, and many other ensembles.

Stephen is also a published composer and arranger of choral music, with a long and growing list of commissions from individual choirs across North America, and from such entities as the British Columbia Choral Federation, the Women’s Commissioning Consortium of the ACDA, and the Canadian Broadcasting Corporation. Stephen’s work as both composer and pianist can be heard on dozens of CDs in commercial release, including a solo recording of classical piano miniatures entitled “Kaleidoscope,” which is available on iTunes.