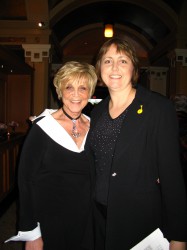 Since 1987, over 200 singers whose ages have ranged from 17 to 79 have been members of Elektra. There are usually about 45 singers in the choir, all volunteers, many of whom travel long distances just to come to weekly rehearsals. For most, Monday nights have become time to be together with other women who want to work hard and produce something beautiful and meaningful. Some stay for a year or two, others much longer, and two have been with the choir from the very beginning. Singers have been teachers and students, arts administrators, lawyers and police officers, an architect and a pharmacist, choir directors and band leaders, organists, a flutist, a harpist, guitarists and pianists, dancers and a stilt walker, accountants, office workers and a financial planner, a sales manager and a preacher. They are typical 21st century women – with careers, homes, families, but even more – each has a strong passion for singing classical choral music at a high level.

Elektra has a strong relationship with many Canadian choral composers and arrangers and through its concerts, recordings, and website, proudly promotes new repertoire. In 2014, Cypress Choral Music launched the “Elektra Women’s Choir” series for accomplished treble choirs. From 2016-2019, it undertook Celebrating Women Composers, a project to create opportunities for and raise the profile of women composers. The choir has become a valued resource for conductors the world over looking to program the best of Canadian and international repertoire for treble voices. On its website, Elektra houses a permanent Repertoire Resources section, in which one can find all pieces programmed by Elektra since its inception. Curated lists such as “Top Canadian Picks,” and “Suitable for Young Voices” help guide conductors through nearly 600 works. This resource has become invaluable to conductors from around the world.

In 2010 and again in 2017 the choir  took first place in the “Equal Voices – Women” category of the National Competition for Canadian Amateur Choirs. Prior to 2010, the choir was awarded first prize for women’s choirs in four consecutive rounds of the biennial CBC National Choral Competition, as well as several major prizes for contemporary music performance. A multiple national prize-winning ensemble, Elektra has been honoured to perform at conferences of Choral Canada, the American Choral Directors Association, Chorus America, the International Society for Music Education, and the International Federation for Choral Music, where it performed by invitation at the World Symposium on Choral Music in Sydney, Australia (1996) and Barcelona, Spain (2017).

Ongoing community engagement programs are a priority for Elektra, many of which encourage youth: Mira Youth Mentorship (annually), Choral Encounters festival (annually), The Diane Loomer Choir (annually), a Youth Scholarship, and a  Reading Sessions of New Works (every 2 years) ensure that Elektra’s music and activities are accessible to all. Each Christmas, Elektra welcomes a local children’s choir to sing alongside the choir and in their own solo spotlight.

Elektra enjoys interacting with other women’s choirs to share repertoire and technique, and has created a triennial, four-day festival in Vancouver called Tapestry International Celebration of Women’s Choirs. Any choir may apply to participate, from which up to three are selected. Each choir performs on its own and as part of the massed choir, which each of the participating conductors leads in repertoire of his/her choosing. Choirs from Canada, the United States, Japan, Iceland, and Norway have participated. The next Tapestry International is in May 2022.

In 2017, Elektra and VOX Femina Los Angeles co-hosted a first-ever Women’s Choir Symposium in Los Angeles, in which 50 conductors of women’s choirs from across North America and Denmark came together to discuss repertoire and build networks. During the COVID-19 pandemic, Edmundson has hosted women’s choir conductors from across North America for a weekly Zoom for learning and support in a program called Forward Thinking: Women’s Choir Conversations.

Elektra has 17 CDs available. Its first “Elektra Women’s Choir” (1992) was nominated for a JUNO award. These recordings frequently offer first recordings of commissioned and other new works, making an important impact on the ecosystem of composers, performers, publishers, and listeners. The choir’s CDs are available through iTunes and on streaming services and are in constant demand locally, nationally, and internationally. Elektra is frequently heard on CBC radio broadcasts and on NPR in the United States.

In July 2018, Elektra participated in a major project of Choral Canada called …float… This immersive experience on a savory farm in St. John’s, Newfoundland included six commissioned works.  In August 2018, Elektra recorded with heavy metal artist Devin Townsend on his acclaimed album Empath, an experience which took Elektra’s sound across the world to new listeners.

In June 2022, Elektra released a video, Snewíyalh tl’a Staḵw (Teachings of the Water), with a score commissioned from Canadian composer T. Patrick Carrabré. This 3 year-long collaborative project with Coast Salish First Nations was conceived by Co-Curator and ethnomusicologist, Dr. Jeanette Gallant, and is a musical exploration of water teachings in First Nations cultures.

In October 2022, Elektra will present its most ambitious commissioning project to date: The Lost Words: A Spell Book. 10 Canadian composers have set two spells each from the bestselling book celebrating nature, children, and language by Robert Macfarlane and Jackie Morris.