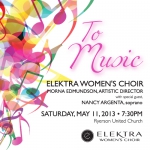 To the core of it all—a tribute to the art of music, to the marriage of words and melody, and to the connections and memories evoked through song. From Bach to Joni Mitchell, from the church to the coffee house to the concert hall, as humans we lift our voices. Elektra celebrates the power of music with one of Canada’s most celebrated singers. Internationally-renowned Canadian soprano Nancy Argenta is our Special Guest, sharing some of her favourite solo repertoire and performing together with the voices of Elektra. Ms. Argenta will be performing two Purcell songs and a rare, full performance of Schubert’s beloved song cycle “The Shepherd on the Rock”.

Nancy Argenta has been hailed not only as the supreme Handel soprano of our age but is also recognized for her performances of works by such diverse composers as Mahler, Mozart, Schubert and Schoenberg. Her discography includes over 50 recordings and as an EMI/Virgin Solo Artist she has recorded Schubert Lieder, Scarlatti Cantatas, two discs of Bach Solo Cantatas as well as two of Purcell songs, the first of which, O Solitude, was honoured with a Classic CD award. As a devotee of the song repertoire of all periods, Ms. Argenta tours widely as a recitalist, presenting songs with original keyboard accompaniment of harpsichord, fortepiano, or modern piano. Ms. Argenta is now on the Voice Faculty at the Victoria Conservatory of Music, which is quickly becoming known as one of Canada’s foremost training programs for young singers.