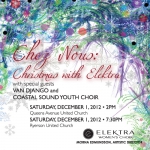 What happens when Vancouver’s premiere gypsy jazz band and Elektra meet over the music of Christmas? Launch your Christmas season with a swing in your step and join us at “our house” for a lighthearted blend of traditional melodies, exquisite a cappella, and new arrangements!

Elektra Women’s Choir will start the program with luscious carol arrangements and thrilling new compositions by Mark Sirett, Roger Stratton, Stephen Smith, Guy Forbes, Jeffrey Enns, and Katherine Dienes, as well as others. This year we welcome as guest artists the gypsy jazz quartet Van Django, who will put their signature playful spin on traditional Christmas repertoire, including arrangements from A Charlie Brown Christmas, Django Bells, and more. In addition to Van Django, the compelling Coastal Sound Youth Choir and their director Carrie Tennant make for a fabulous addition to the program, and the combined forces of Elektra and Coastal Sound will result in over 100 voices participating in parts of the program.

Chez Nous: Christmas with Elektra! is designed for whole family, and children as well as adults will be enchanted by the joyful mixture of the traditional and the new that celebrates the essence of the Christmas season.

Conductors: note that this was our first Chez Nous concert with a mixed choir as guests. It made for some creative rewriting of the massed choir repertoire (notably Three in White and the encore, Sleigh Ride). If you would like to see how we rearranged those, please email me.